Since 2019, WHEM has been conducting environmental testing and subsurface characterizations related to the discovery of per- and poly-fluorinated alkyl substances (PFAS) in wastewater discharge from the former FireProTec building, fire suppression sales and servicing facility.  The likely on-site source of PFAS contamination appears to be the servicing and cleaning of fire extinguishers with aqueous film forming foam (AFFF), which contain PFAS, an activity that was historically done at the facility between 1987 and 2018 on only limited occasions.

It is assumed that cleaning water with dissolved PFAS was discharged from the building via the floor drains.  From the floor drains, the PFAS-laden wastewater flowed to an oil/water separator (OWS) and then to the ground surface (2013-2018) or to the former septic system leachfield (1987-2013).  Through testing of a new network of groundwater monitoring wells installed by WHEM, we have identified a plume of PFAS in groundwater centered in the general area of the OWS and septic leachfield and extending northward onto the abutting property.  Based on a southern extension of the plume, there also may be an off-Site, upgradient source of PFAS impacting the property.

The most recent investigation in 2020 evaluated the presence of PFAS in shallow soil near the source area, specifically the leachability of PFAS, and concluded that residual PFAS in soil around the former septic area could continue to leach to groundwater into the future.  WHEM’s investigation concluded that the PFAS in soil are well below health risk standards for dermal contact, and the groundwater is deep and not posing a threat to drinking water for nearby residents.  With approval from the State, the owner has agreed to conduct additional groundwater monitoring, and then to evaluate the need and options for corrective action to reduce or eliminate the source of PFAS. 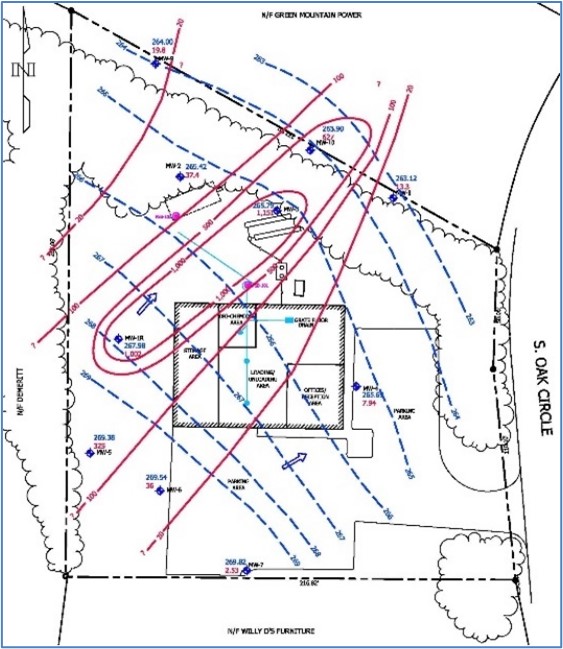