WHEM consults for the owner of a real estate office located on a property that historically operated as a Texaco fueling station and auto-service garage from at least 1938-1960.  WHEM’s Phase I ESA for the property confirmed the historic use and our review of historical Sanborn® Maps identified the potential presence of three (3) USTs on the east-central portion of the Site.  In response, WHEM oversaw an Initial Site Investigation that included a targeted ground penetrating radar (GPR) survey, the installation of eight (8) soil borings and three (3) monitoring wells, and the sampling of Site soil and groundwater.  The investigation – specifically the GPR survey – confirmed that the (3) relict USTs had been removed but that the concrete fuel island pad remains on-site in the subsurface.

Based on the historic property use, soil samples were collected from installed borings at shallow & deep intervals for analysis of suspected contaminants of concern (COCs): Volatile Organic Compounds (VOCs), Polycyclic Aromatic Hydrocarbons (PAHs), Lead, and Arsenic. WHEM’s investigation confirmed that the Site is impacted by a petroleum release and the spatial array of WHEMs sample points facilitated the delineation of the source area and allowed the vertical and horizontal delineation of soil impacts; WHEM determined that soil contamination is concentrated in the deeper (>4 ft) soils in the vicinity of the former Texaco Fueling pad, split between the Site parcel and Shelburne Road ROW to the west.

WHEM concluded that petroleum soil contamination does not abut the foundation of the on-site real estate office, which allowed WHEM to rule out an exposure pathway of concern – vapor intrusion (VI) of petroleum impacted soil gas into the office space.  WHEM’s evaluation of Site groundwater confirmed petroleum impacts with the delineated contaminant plume mapped off-property extending into the Shelburne Road ROW, but not extending across the road onto a school property. This SI was shared with the VT DEC and VTRANS in support of the planning effort for the reconstruction of the Shelburne Road Rotary Project. 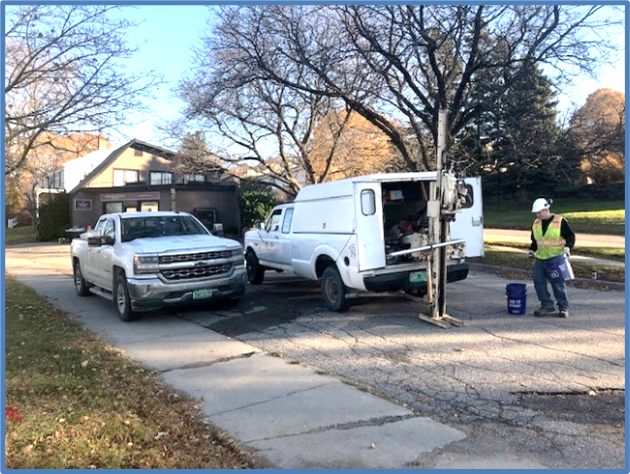