WHEM has been working with a developer on a Brownfield project in Colchester, Vermont since 2019.  The 1.53-acre property was formerly occupied by a commercial building that housed a dry cleaner from 1976 until 2014.  WHEM conducted a Phase I ESA, developed a QAPP, conducted a Phase II ESA, and is underway with additional data gap testing, much of it funded by an EPA Brownfield Grant via the Chittenden County Regional Planning Commission (CCRPC).  Contamination from the dry cleaner, namely tetrachloroethene (PCE) through spills and leaks on the floor, was first identified in groundwater in 2003 during initial rounds of site assessment.  There was a pause in work, and WHEM was asked to get involved by the developer in 2019.

WHEM’s Phase II involved installation of new wells and soil vapor points, sampling of soil, soil vapor, concrete, groundwater, and wastewater.  The soil vapor testing identified very high PCE concentrations under the slab, extending at least 50 ft away from the building footprint and possibly onto abutting properties.  WHEM further characterized the plume of PCE in groundwater.  The contamination to groundwater has been complicated by the fact that there is an onsite septic system, and due to failure of the system in the mid-1990s and re-construction of a leachfield on an abutting property, the contamination spread.  Other complexities include an abandoned fuel oil UST under the building and asbestos in select building materials, so the redevelopment is complex.

WHEM has completed an evaluation of corrective action alternatives (ECAA) and is currently drafting a CAP, as the preferred alternatives have been selected.  The CAP consists of source soil removal and disposal, the installation of a soil vapor extraction system, and possible groundwater injections to boost bioremediation potential at the site.  The CAP also includes the installation of four new monitoring wells for long-term monitoring.  The site is to be redeveloped for storage units. 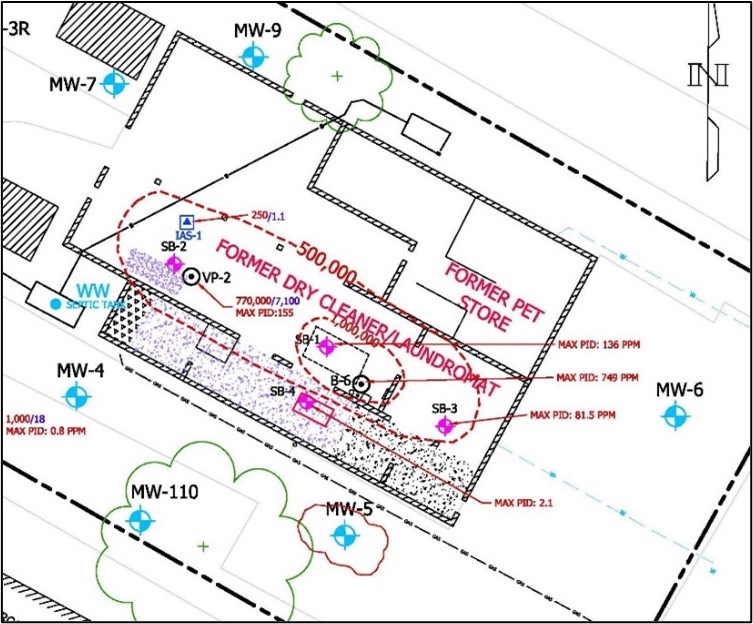